What are the standards and procedures for banning posters?

I've searched the help, but I can't find anything about the standards or procedures for suggesting/requesting that a user be banned. Am I missing something?

I'm asking because I noticed that a user posted a fairly obvious anti-semitic rant (ie, he invoked the Protocols of the Elders of Zion) recently. I flagged the post, but have heard nothing. Although the post was deleted, the user is still quite active.

It's possible that the post was flagged as rude/abusive by six users, which automatically deletes the post and dismisses the flags. The user will get a 100 reputation penalty, but the ♦ moderators won't be notified of this. A meta post like this (or a custom flag on one of the user's other posts) might then draw their attention so that they can have another look and check whether a suspension is warranted or not.

It's also possible that they've sent a warning in the form of a moderator message, but didn't issue a suspension because it's the first offense. That is entirely at the moderator's discretion.

SE has a general problem regarding information, that there are a lot of questions about the running of SE that come up which you cannot easily find answers to, because they aren't in any obvious place in the help center. It is typically unproductive to ask on the main Meta. The usual response to a request for information is downvoting and closure, since somewhere someone has said something about the matter and it's an already asked question. I think moderators know these answers, possibly because there is a manual that comes with the diamond. Like the law, ignorance of the existing answer is no excuse.

From what I can discern (as a non-mod) there is no such thing as a user ban. There is a temporary suspension of access (as indicated in this question, closed as a dupe). None of the discussion hints that non-mods have any role in suspensions, except insofar as you may flag a post that triggers a suspension. Just as you can write to your congressman asking for the impeachment of POTUS, you can write to your mod asking for the suspension of a user. The real non-parallelism comes in the lack of private channels of communication with mods. A technically possible but bad option is to complain about user X for having done so-and-so, making that complaint a question on Meta. So the only way to hint at a ban is via flagging.

I think it's rude or at least not a great idea to publicly complain on Meta about a specific user (or moderator) and I would not encourage it. In some SEs (not this one), moderation is slack enough that people get away with stuff, but these mods are on it within minutes, so flagging is a good option. I did not know about this auto-delete feature and the fact that flag-things can happen that don't get reported to mods, so in a single instance, they might not know. I doubt that a repeat-offender can fly under the radar.

Incidentally, you do not get notified that moderators took (or rejected) your advice. Sometimes you can figure it out.

See What if I see someone doing something bad?

Regarding the other question:

What action was taken on my flag?

Go to your user profile, Activity tab, and click on the flags in the Impact block: 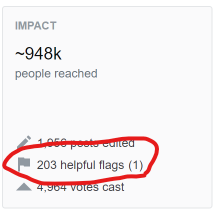 There you can see every flag you've raised and how it was handled. Hopefully most of the time it will be marked "helpful." If the flagged question or comment is no longer there then the mod who marked the flag helpful might have also deleted the question/comment, but you can't be certain since it could have been deleted by the author or by the system as a result of flagging by a critical mass of other users.

The other way a flag can be handled is to be "declined." Often there will be one of a handful of canned reasons for declining it listed, as in this example:

Sometimes a custom explanation will be provided, as in this example:

Not the answer you're looking for? Browse other questions tagged discussion moderation .

Welcome!
This site is for discussion about Law Stack Exchange. You must have an account there to participate.
Help