How should one properly request that an answer be justified?

I was a bit unconvinced of the correctness of this answer: https://law.stackexchange.com/a/8949/1340

To me it seems like there is no justification provided whatsoever1. I am aware that justification isn't necessary for answers: Do answers need to reference written laws or court cases? However, in this case it is quite easy to find the applicable laws online so it seems to me like it would be necessary to use these to make a convincing argument.

In this case it sounds like the answer is There was not an immediate need for the use of force therefore it was illegal. But am I expecting too much from these answers? Do they not need any justification at all? Or should I have been asking for this justification in another question? If it is the latter, what should the question look like? To me it seems like I would just be asking exactly the same question again with an extra "with justification please" at the end.

1 The OP quoted a news article's summary of the law but to me this isn't very convincing either. I have seen news articles get laws wrong, or at least over simplify them, before. Additionally, in this case, a news article explicitly disagrees with the answer: http://nypost.com/2016/05/01/11-year-old-boy-makes-home-invader-cry-like-a-baby/ The eleven-year old faces no charges, as Alabama law allows for one to use deadly force in the event of unlawful entry or burglary. Which makes me less likely to trust either the news source or an unjustified answer on Stack Exchange. 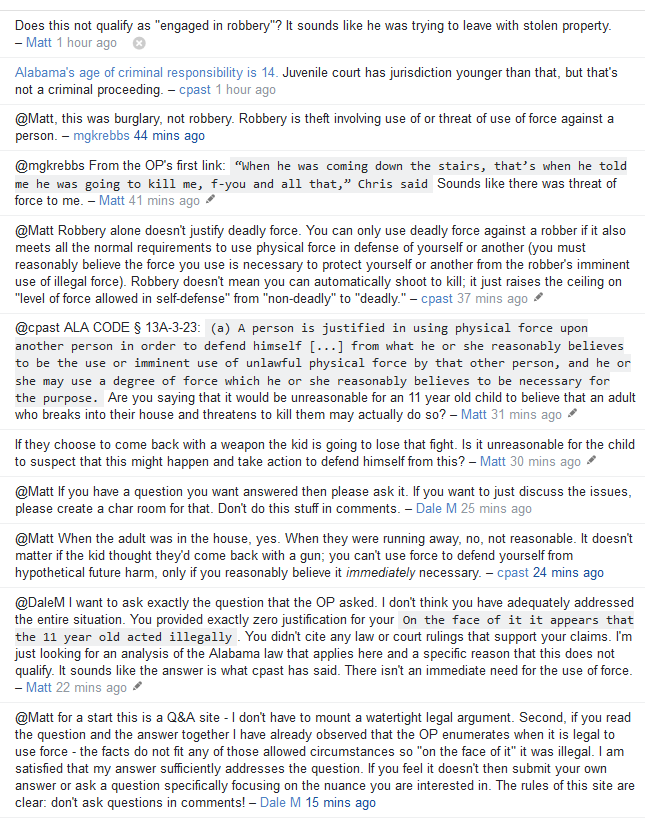 You've identified a question that has an answer you feel doesn't provide an answer that satisfies you. Presuming that flagging the answer isn't applicable and ignoring your voting options I believe at that point you have several options; an incomplete list of which I'll provide:

I think this is an issue that users here need to internalize and let be guidance in formulating answers. I recognize that this is somewhat contrary to the SE stipulative-answer model where you just say what you think and people up- and down-vote based on how they feel, but we can do better than that. I'm not specifically addressing the referenced question and answer, rather I'm addressing answers in general. A good answer is not simply a statement of what is true, it also integrates the facts that support the conclusion. The hard part is that many questions are quite elementary and "everybody" with a modicum of legal knowledge knows this stuff – but very many questions come from people without that modicum.

A simple example is a question about contracts, where one of the essential elements of a contract is missing, such as consideration. It turns out that not everybody knows that there are these essential elements to a contract, and this stuff is actually written down somewhere. While it is "common" knowledge that a "contract" without consideration isn't a contract, this isn't actually universal knowledge. Unfortunately, the interwebs is full of people who just make stuff up, so from the POV of a naive question-asker, it's hard to tell if you've found a person with authoritative knowledge, who has simply forgotten to give some factual grounding to a claim, versus a person with an opinion.

It is a pain in the a** that you can't just Google something from American Restatement of Torts, Second, but if and when someone has a copy and can actually cite from that book, then that makes an answer much more valuable that simply saying "That's the way it is". We are accumulating exemplary answers that can serve as basic reference materials, which provides another source of authority for claims. It is often difficult to remember to provide the evidence (or to even be able to reduce it to a concrete thing like a quotation and page number, rather than something that you just know). Still, it is worth making the effort.

And so, in answer to the question, I suggest something simple in the comments -- "Is there an authoritative basis for saying that 'valuable consideration' is required for a valid contract"?

Not the answer you're looking for? Browse other questions tagged .

Welcome!
This site is for discussion about Law Stack Exchange. You must have an account there to participate.
Help
Visit chat

10
Do answers need to reference written laws or court cases?

7
Should we have a "no ranting" policy?
9
How to emphasize "legal may not mean smart"?
3
Does providing context about real or hypothetical situations in a question imply that I am asking for legal advice?
6
Request for comment: How to write a Good™ Law SE question
1
How can I find out about redaction practices?
14
How long is an "Extended discussion"
0
How to deal with comments?
2
Why the law is written in a certain way? Is this on topic?
10
Are questions about the validity of legal analysis from Law & Order off-topic?