Should the job ads bar be brought to law stackexchange

Stackexchange is home to many different communities, full of experts in their fields. one of the cooler features in the stackexchange community is the jobs side-bar like the one shown on stackoverflow(a community of coders), this side-bar displays job listings, their locations, and the skill sets required to work the job. This allows community experts to display their talents in the real world and make a living doing what they're great at. 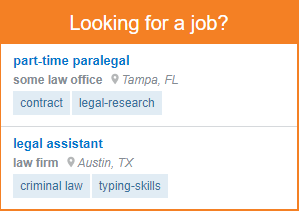 I can imagine this could mean revenues to SE and I have nothing against that, but trying to sell this as a benefit to users just doesn't cut it.

I see no added value in adding the feature you suggest. Interested candidates can always include a few SE links (and/or the candidate's online IDs, if need be) in their resume or cover letters for a prospective employer to review their record. That sort of screening is more effective than having a recruiter/employer phone-call the friends a candidate lists as his references.

Additionally, it is well known that the same job positions are posted simultaneously in multiple job search platforms: Indeed.com, monster.com, craigslist, Linkedin, as well as niche sites. Sometimes the multi-posting is done by the same recruiter, other times by multiple competing recruiters. Posting them also on SE is fine; it's just not really a "plus".

No. Why? Because unlike on stackoverflow which is recruiting people that demonstrate a skill set in coding regardless of background, the law is not just about a skill set or knowledge, but a profession requiring professional licensing and thus not well suited for this community.

Not the answer you're looking for? Browse other questions tagged discussion feature-request stackexchange user-interface .

Welcome!
This site is for discussion about Law Stack Exchange. You must have an account there to participate.
Help
Visit chat

4
Should we encourage tagging according to the appropriate field of law?
2
Is Law SE primarily for arguing what the present, written Law says or what a perfect Judge would decide--if such could exist?
13
Should those who have passed the bar be uniquely designated on this site?
1
Can a technical question be rephrased to be on topic for Law StackExchange?
4
Community Promotion Ads - 2016
4
Are questions about the job of being a legal professional off topic for this site?
3
What causes an old question to (seemingly) randomly be brought to the front/top of the Stack?
3
How can you trigger Law SE to pop-up the name of a user in your comments with the at mark? Is it a hidden privilege?